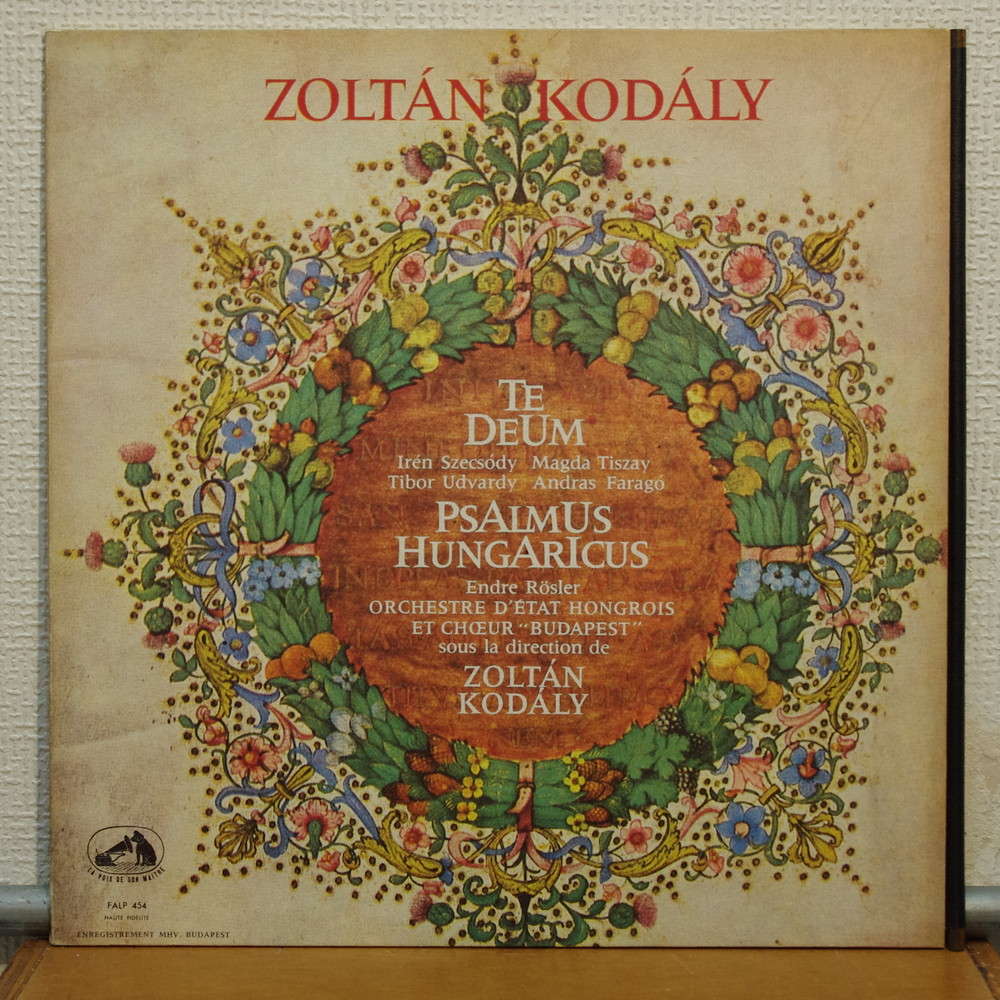 Warmly welcome to everyone here in our concert today. This day presents a very special occasion: I had two reasons for choosing Psalmus Hungaricus. I think I can remember his lecture: Namely that we musicians must understand why each note is what it is and not something else. This quest for kidaly answers flashed a beam of light on my understanding that we can take in music subject to the relation between our expectations and the fulfilment of our expectations.

For those who listen to music the delight in and joy of music will primarily be materialized in the fulfilment of their expectations, which can simply be called recognition.

We musicians also learn by first understanding the rules through less determinative masters or small pieces, and later when we meet the great masters, we try to learn the miracle from them, i. We musicians are capable, with some luck, of phrasing the answer for ourselves, but You can also often feel some suspicious or strange in Your innards.

After all, this is one of the most essential parts of listening to music. If we wanted to give a name to these four elements, the correct formula could be AABA, considering that the 1st, 2nd and 4th elements are very similar, whereas the 3rd is considerably different. In the very first moment the central point of the melody essentially seems to be a single sound, an E tone on the bottom-most horizontal line, as it sounds twice equally in the 1st, 2nd and 4th elements.

The 3rd element differs significantly: This outstanding tone expresses the essence of the text: What seemed to be a difference from the nearby will smooth out into resemblance from a distance, so the first and second meters can essentially be taken as identical.

Still, using this division, we find the third tact discordant. Because a fourth, new sound, the A tone is sung, and on top of it all, three times one after the other, which exceedingly highlights the importance of the meter.

This means that if we analyze the first two rows of the theme as a single unit, it kldaly similarly have an AABA structure where the 2nd and 4th elements are wholly identical. So our expectations will apply from this very moment on. Whether we know or not, whether we understand or not, this experience creates a certain kind of expectation. If we live through something twice, it will next appear as an expectation. The developments in the continuation are very interesting. Going back to the first two rows of Psalmus: How many tones have we heard so far?

D, E, G, A. How did the new tones appear after the first two tones D, E? They started the 3rd element of the quadripartite divisions. What do we kodapy then? Not so much, from a distance. So then if these are the first two rows, what kind of third row do we expect? But actually we have one more tone left, the fifth tone if we stay within the frames of pentatony.

Perhaps it suggests that the part after the rest has a special significance. And this is it: No bigger falsehood could be opposed with our expectations.

Here we are thwarted and have no clue as to what key we are in. Be that as it may, the fourth row must come now, and this as always so far must definitely coincide with the second row.

Whether You believe or not, this is the correct answer. This is how it should be or, to be more precise, this would meet our expectations. Deliberately he added a different ending to the melody. Partly because the closing tone is one fifth [3] lower, which recalls the ancient descending nature of Hungarian folk music.

Moreover, the last tone leaves the former structure and opens the door to the ideology of the whole piece. Dear Ladies and Gentlemen, Perhaps the above words could already reveal that Psalmus Hungaricus is an exceptionally exciting piece.

The masterpiece is composed for tenor solo, mixed choir and orchestra. The tenorist plays a narrative role, a frequent role in oratorios: Actually, this is the only poem that survived from the otherwise unknown poet. A great number of translations were made of the psalm in the age of reformation, still, touchingly, some personal thoughts also infiltrate into this translation of the 55th psalm and petition, written in heart-sore, grief and sorrow, and this makes it a real Hungarian psalm.

Unfortunately, this psalm is still a kind of summary of us Hungarians. A mirror of our life, heart-sore, our bad and good relations with one another. What makes this composition even more specific is that the Hungarian nation began to understand its own music at this time, it began to make acquaintance with its own cultural and musical identity and this is when the linked logics of Hungarian folk music and European music evolved into an unbreakable, wholly uniform and natural for all process.

Psalmus is a genuine romantic work. Right in the very beginning it starts like furious.

No musical composition would have such a beginning. Just keep Your ears open to the starting moments when we feel as if we were jabbed with a dagger. As early as in the introduction Psalmus reaches one of its highest peaks. We immediately understand that it will be about life and death, since our composer immediately initiates us into the most serious drama.

We hear it several times as a small recurring musical unit, a so-called ritornello. Later on this evolves into a process of wondrous power ranging from psalm obsecration through bitterness to curse. Just listen how many dozens of times we hear it in the piece.

And then of course, after the orchestra, this gesture of two adjacent half-tones will also be sounded by the singer and in the various parts of the choir. This is real tremendous anguish. This is then again followed by simple sound-painting. What does this orchestral play symbolize? A twirl within itself. The now well-known crying motif almost shouts as it breaks the twirling motif: We, the listeners also got in a scary emotional state.

But this will still intensify: The real zenith is curse. We all know very well that for the professed man the curse he utters himself is impossible. A Christian must not accurse anyone. Yet art in its own soaring is always trivially humane. And we, humans curse each other at least allegorically rather frequently and, unfortunately, more often than required. A poet must inevitably show the antagonisms that would not exist in us, humans without one another.

So then the piece reaches its zenith when the psalmist cries out: Actually, nowadays we also say so with some other ruder words and, unfortunately, rather frequently. Take note of the contraposition. This is what the psalmist sings: This is how he confronts the benignant and kind friend who in fact was an enemy. We have no other choice but faith, confidence and hope. In addition to the harp, a violin solo plays the leading role here.

The choir has so far seemed to have a subordinated role. Then getting higher and higher in this circle of fifths [6] and following a major augmentation the choir sings in really triumphal height. The first word is again devoted to curse, as a peculiar phenomenon in human nature is that it expects the Lord to destroy its own enemies and first it thanks for this.

And then he needs a single run to help us flee from the almost burning fire of the orchestra.

Delight in this exquisite beauty. But then something happens and reasons why I spent so much time at the beginning of our concert today on explaining the structure of the leading theme to You.

The composer phrases these words in the last two rows of the leading melody and closes them just as he closed the leading theme in the beginning of Psalmus. Listen to this gloriously sounding, poignant triumph, the hjngaricus and joyful hullabaloo of the trumpets, the timpano and the entire orchestra. What will follow now? Nothing else but what this masterpiece began with. Now again we can listen to the psalm song. The latter seems to be odds-on, given that the dream has dissolved, pswlmus belief whereby the Lord elevates the righteous exists in our hopes only but, unfortunately, not in the actual present.

And just as expected, the melody will indeed end as heard for the first time: But then, almost beyond the ending, the tenor part sings the ending that materializes the zenith — very soft, from a distance, as a message from eternity. The two different closing tones of these two different farewells sound concurrently and so close the entire piece, and we, the audience can decide, relying on our feelings and thoughts, what catharsis we will reach by the end of Psalmus Hungaricus.

All these thoughts reveal an eternal message and eternal lesson.